Years ago if you had told me that I would be cooking and eating octopus, I'm sure I would have laughed in your face. Ha! Who me? I have always been a squeamish eater. Not limited in my choices (ok, as a child I was limited, I have to admit it), but not particularly adventurous either. I like fish and even shellfish, but I draw the line at mollusks and things that are still alive. Trust me, I have lived in both Japan and Italy where people eat things that are still alive...
Octopus is something that I imagined I wouldn't like, but instead I have discovered is quite delish. And living here on the Adriatic coast means access to freshly caught octopus all summer long.
Imagine a relaxing day at the beach. You've got your suntan lotion, your magazines to read while kicking back on your beach chair, your goggles for taking a swim when it gets too hot...what more do you need? Well, if you are a normal, red-blooded man from our town, you also need an old wire hanger and a bit of raw meat. To catch octopus with, of course!
This video shows step one of the octopus tenderizing process. It is not recommended viewing for the tender-hearted animal rights crowd, but it is what you have to do to render the octopus edible. If you prefer a version without live action, take a look at this series of photos on my other blog Molfetta Daily Photo entitled The Death of an Octopus or Lunch is Served.

After the poor creature has been beaten to death and had its head turned inside out (ugh again!), it looks more or less like this fellow in the photo below: 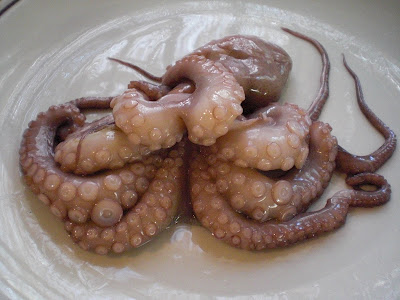 At this point, many locals start cutting off bits (or even chewing them off directly) and eating.

Personally, I prefer my octopus cooked. A nice recipe is Octopus Salad. Just boil the octopus in a small quantity of water for about 20 minutes. You don't need much water because, as a local saying in dialect goes, "u pulp s cosc ind all'accq so stess" or "the octupus cooks in its own water."

Once it's cooked, just chop the whole thing up into bite-sized pieces and mix with olive oil and chopped parsley...and buon appetito! 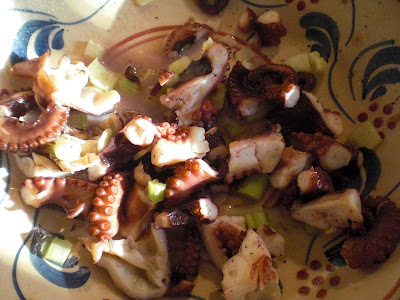 I used celery because I was out of parsley on the day I took this photo. There was also not much salad left by the time I took the photo...it's a popular dish at my house.
Posted by Saretta at 9:27 AM

I'll check the videos when I'm back home. I love octopus, but my US husband has never acquired a taste for it: more for me to eat:)!

So I stopped by this blog first and realized I didn't have anything to say about octopus, then stopped by (what I now realize is old) your other blog. I guess I should have checked the post date on your blog! oops!!

At any rate, Thanks for stopping by my SITS Potluck Post, today!

We enjoy octopus but have never used celery with it, so learnt a useful new tip today, thanks for that.

Francesca - as you say, more for YOU, yeah!

Vic - welcome to Amid the Olive Trees!

LindyLou - what do they say, necessity is the mother of invention? ;-)

I love Octopus salad (and like you I would never have thought to even attempt trying it!!) - but I just can't make it - I tried once and it was a disaster - a pan of gungy, pink frothy stuff and the Octpus skin that would not come off - it all went in the bin!!! I'll stick to eating Octopus salad when made by others - so much better :))
Kathryn (www.ourprivateblog.wordpress.com)

I love octopus. I used to work in a greek seafood restraunt and the boss would marinate the octopus for a few days before cooking and it would gl a beautiful purple colour. Unfortunatley it was a secret marinade! We would tenderise our octopus by putting it into a (used for seafood only) cement mixer and leaving it to bash around for a couple of hours. We would also use it to tumble the unopened oysters in to get rid of sharp edges before opening.

those spanish supporters would be appalled by this! :P