I'm in about week 4 of my Social Photography course. (If you want some background on the course, click HERE for my previous post on it.) We are learning all about our cameras and how they work and, theoretically, how to take different kinds of photos. There's been a lot of talk with very little practice so far, which drives a practical sort of gal like me nuts.
Great! I think during the lessons, it's all very clear! But when I try to take a photo, all the info we have heard about in class gets all mushed together in my brain and I have no clue as to how best to capture the moment. In fact, the moment passes while I'm fidgeting around pushing buttons, trying to calculate exposure, white balance, aperture . . .
We have had one photo assignment so far: to record a process. Our instructor assured us that the emphasis was to be on capturing a process and not on the beauty or technical perfection of the shots.
Here is my sequence of photos which capture a trip with my younger son to the mall to pick up the new Pokemon Black and White game for his Nintendo. This was rather a big deal because he had sold a bunch of old games to pay for this new one, and there was apparently a countdown on various media to the worldwide release of this game. All very exciting for the hardcore Pokemon fan, you can imagine.
To tell you the truth, these photos are absolutely nothing special. The process was definitely captured, but I shot them all on automatic. Cheating? I don't know. I think I will need a lot of time to practice just shooting and shooting pictures while playing with my camera's multitude of settings to see what happens.

In the meantime, if I want to take quick pictures I'll stick to automatic or even my old compact camera.
Posted by Saretta at 9:49 AM 12 comments:

It's that time of year again...March. My least favorite month of the year. My husband likes to joke that I feel that way because it's his birthday month. So, my apologies to all of you March babies! But trust me, it's nothing personal. 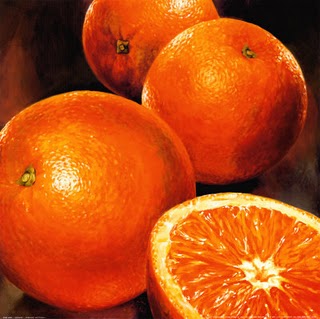 It's just that by the time March rolls around I have had it with winter. I am all fed up. I don't want to see any more rain or fog or snow or grey days. I am ready for spring. Unfortunately, spring is never quite ready for me in March. It's still wool sweaters and heavy coats time while I'm dreaming of wispy dresses and high heeled sandals. Grrrr... 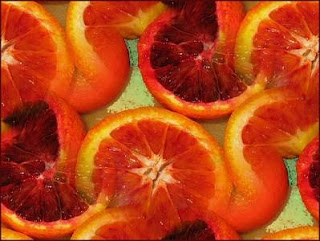 Luckily, with a little imagination, I can find a sunshine substitute right in my own refrigerator. It's orange season. Besides your plain old orange orange, the stores here are also full of these fantastic Sicilian red blood oranges, also known as Tarocco oranges. They are sweet and seedless and, besides making fantastic OJ, can be used to make a delicious Sicilian Orange Salad. 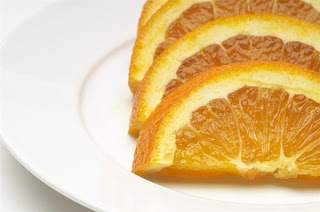 This combination of fresh seasonal flavors is fast and easy and can be served as a side dish or a snack.
INGREDIENTS 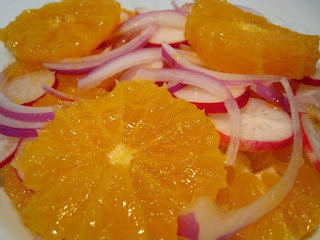 DIRECTIONS
On a serving platter, alternately arrange orange and onion slices, with the slices slightly overlapping. Sprinkle with basil. Drizzle with oil and sprinkle with pepper. Yield: 6 servings.
A tip: soak the sliced red onion half an hour in a bowl of water. This takes a bit of the sharpness out of the onion's flavor. Of course, if you like sharpness forget I mentioned it! 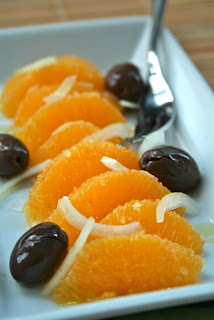 As with all recipes, variations are allowed and even encouraged. Do you like olives? Throw some in. 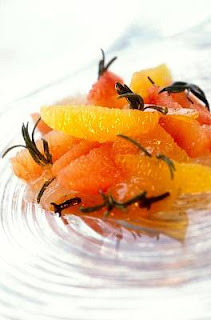 Want to try it with some sprigs of rosemary? Why not? 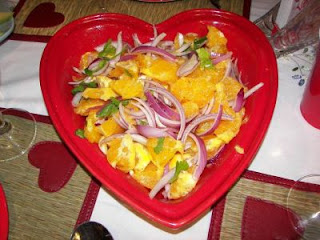 A plate of instant sunshine!
Posted by Saretta at 8:25 PM 9 comments:

THIS GIVEAWAY IS CLOSED - CONGRATULATIONS TO NORMA!


It's giveaway time again!!!
CSN Stores would like to present one of my lucky readers with a $45 gift code to shop at any of their stores!
There are 2 requirements:

1. You must be a GFC follower of Amid the Olive Trees.

2. You must go to one of CSN's 200+ stores and tell me what you would buy! You can use your gift code to purchase whatever you like such as: exercise and fitness supplies, jewelry, or a home furnishings gift for yourself such as handy adjustable bar stools. The choice is yours!

3. Follow me on Facebook.
4. Follow me on Networked Blogs.
5. Follow me on Twitter.
This giveaway is open to US and Canadian readers only. Sorry International Readers, I will definitely have another giveaway soon open to everyone.
This giveway will end onMarch 31st at midnight CET.
Posted by Saretta at 9:25 PM 185 comments:

Email ThisBlogThis!Share to TwitterShare to FacebookShare to Pinterest
Labels: giveaways 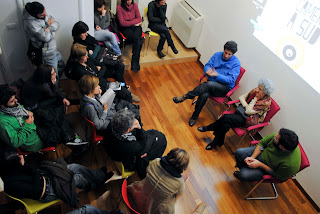 I had the great pleasure of hearing Cecilia Mangini speak of her life and filmmaking experiences last Saturday night. The occasion for this encounter with this legendary figure in Italian documentary filmmaking was the presentation of a book, Con Ostinata Passione (With Obstinate Passion), written by Gianluca Sciannameo, the founder of the Camera a Sud Cultural Association (where I'm taking my social photography course). 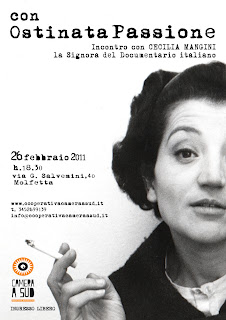 Mangini was the first woman to document on camera the reality of everyday life in Italy, particularly those situations that could be considered "troublesome," that the mainstream media were doing their best to cover up and/or ignore in the postwar boom period of the 1950s and 60s. She captured many portraits of people and ways of life that were struggling to survive or which were somehow passed by in the prosperous new consumer society. Her documentaries, made in collaboration with such Italian film greats as Pier Paolo Pasolini, have had both good fortune and bad: at times censored, they have seen both great success and have struggled to find distribution, and yet they have won international awards.
Mangini has Puglian origins: she was born in her father's hometown of Mola di Bari. Although her family moved to Florence when she was six, she spent her summers in Mola and she told us of how she was struck by the contrast between the lives of the working people around her in the two different regions. She felt the pain of the inequalities and injustices faced by the agricultural workers in the south, but came to love the warmth and solidarity of those people even in the face of extreme hardship and poverty. She believes that these early experiences were fundamental in forming her world view and in leading her to take a social exposè approach to her filmmaking. 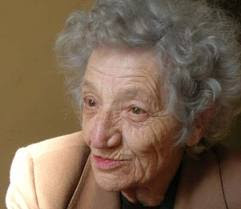 Mangini, born in 1927, spoke of how she believes that she belonged to a lucky generation. A generation of young people with high hopes for a better future after the fall of Fascism and full of energy and intellectual ferment aimed at creating a better world. She admitted that things didn't turn out quite the way they had hoped, but that she is thankful to have lived in such exciting times.
Her approach to documentary filmmaking is to go beyond simply capturing the reality of a situation as it presents itself, but to create a visual work that tells a compelling story. She believes that a documentary filmmaker always takes a position and expresses it through his choice of images and sounds. She also thinks that her films ask and expect viewers to have a reaction to what they see on the screen.
Mangini is a living piece of film history. She was a key player in the transition of the Italian documentary film from the simple depiction of scientific phenomena or landscapes, newsreel reports of natural disasters, to a tool in the impassioned cultural and social struggle of the time.
We watched three of her short documentaries on Saturday, each of which was breathtakingly powerful and emotionally moving. My absolute favorite was "Stendalì" which tells of the Puglian tradition of ritual mourning, expressed through group chanting and crying, and ritualised movements and actions.
I feel truly honored to have met Cecilia Mangini. Not because she is famous or because she has made films, but because she is truly a special woman. Besides directing films she has worked as a journalist, essayist, photographer and film critic. She is 84 years old, yet sprightly, vibrant and extremely intelligent. At the same time, she is humble, charming and obviously open to and curious about new people and new experiences.

An inspiration!
Posted by Saretta at 6:44 PM 8 comments: