Every Child is Special 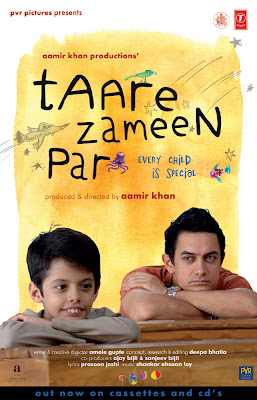 This Saturday night there was a primetime, major network broadcast of the Indian film Every Child Is Special (translated as Stelle sulla terra in Italian). It was a very emotional event for our family because it talked about an issue that hits quite close to home: dyslexia.
About three years ago, I realised that my younger son was having serious problems reading and writing. His teachers had always complained about his lack of organization, distracting chattiness, terrible handwriting and what they referred to as laziness. I could tell that Gabri was not very enthusiastic about school, but I didn't really understand what was going on. He seemed to be doing okay, not great, but getting by.
Twice when his teachers had wanted to talk to us about his "behaviour," I asked if they thought it would be a good idea to take him to a specialist. Both times (once when he was in kindergarten and once in the second grade) the reaction of the teachers was of surprise. "No, no, no," they told me, "he just needs to mature." They even said, "Lots of kids are worse off than him." Huh?
One day during the summer between 2nd and 3rd grades I sat down to read with Gabri. I asked him to read to me, too. He could barely read at all. He had to sound words out, and often got them wrong anyway. He confused "la" with "al" and "da" with "ad." Letters like q, p, b, d all looked the same to him. And that's when I was hit by a lightening bolt of realization.
My son was dyslexic.
My first reaction was to be gripped by a sort of panic and despair. In all honesty, I didn't want my precious son to have a "problem." My beautiful, sweet, perfect son! How could he have a "flaw"? And particularly regarding reading? I live to read. It didn't seem fair. But, of course, it's not fair, is it? Nothing is fair when it comes to difficulties of any kind touching our babies.
But in the large scheme of things, there are lots of more difficult crosses to bear. So, my second reaction was to research dyslexia on-line and contact those people locally who could help me figure out what to do next.
Our path through the confused halls of the world of dyslexia in Italy has been difficult and an uphill battle so far. Perhaps I'll write more about specifics in a future post, but let me just say that when they say that Italy lags behind the States in many things they are often right. It takes even longer for certain ideas to work their way into mainstream acceptance in southern Italy. What may be taken for granted in Milan could be alien to Bari.
And dyslexia is one of those areas. Very few teachers and doctors know what it is or how to recognize it. Laws guaranteeing dyslexic students' rights in schools, and even the recognition of their existence, are just starting to make it onto the books. Finding a therapist who actually knows what they are doing is, let's just say, a challenge.
But, the TV show Saturday night was a big step in the right direction. It was the program that got the most share that evening, with over 2 million viewers. I truly hope that it was able to at least start to explain what dyslexia means to a country that has very little familiarity with this learning disability.
And for us, it was an absolutely heart-warming experience to watch the 9-year-old boy in the film go through the same difficulties as Gabri (who is now 10) and come out on top in the end.
If you are interested in more information on dyslexia you can visit the British Dyslexia Association or Dyslexia USA. You can also get more information on Every Child is Special and you can even download a copy of the film.
Posted by Saretta at 12:49 PM

Email ThisBlogThis!Share to TwitterShare to FacebookShare to Pinterest
Labels: dyslexia

What a wondeful experience to see that movie! That's terrific! Awareness is SO important. I have myasthenia gravis, and most people have never heard of it. Gabri is blessed to have a mother who will fight for her son's rights!
Thanks for stopping by my blog!

Wow, I would have never known that other countries didn't recognize these sorts of challenges. Good for you for figuring it out when then didn't and getting him the help he needed.

What a heart warming post... I have seen the film many times and it is beautifully made... We, in India dint know anything about dyslexia(before the film)... Hope your son also does something special like Darsheel Safary, the child actors real name... Felt nice to have spend some time on your blog...:)

Oh that sounds like a great program. I love how you shared this, these kinds of things are all part of life, as tough as it is, we just have to see the positive in it, and have faith that it's our test in life, it's what makes us who we are, and we're learning some important lessons here.

Popped in from SITS to say hi! What a wonderful mother you are!

Do you want to know what is really sad? In the school wear my husband teaches, anytime a kid is having problems in school they label them dyslexic so the kids that really are dyslexic and do need the help, don't get it.
You are a great mom. I wish more children had a mom like you who was willing to help and fight for their child.

Every child is special, but sometimes only mothers know it, and they have to fight hard to have that recognized, and to have their children come out on top in the end - especially in this country. Baci.

Good for you for writing about this, too! It's scary that schools may not be very proactive exploring kids' learning challenges. Thank you for visiting my blogoir last week on my SITS day.

I sympathise with you it is hard for any child with learning difficulties to cope if they do not get the extra help and attention they need to thrive. I have no experience of how the Italian education system copes with this problem but it certainly does not sound great. Dyslexia and other learning difficulties are much more widely accepted in the UK, that I do know.

Thank you all for your kind words of support. Many of you have said that I am a good mother, but honestly I always feel that I never do enough...

You seem to be very positive and that's good and I know you will find Gabri the help he needs. Love from Sicily. x

We were told that our daughters brain was just 'too busy' to get things down tidily in writing, and that's why everything was so messy! This was from her teacher, and they didn't think that there was a problem. Sometimes by being 'helpful' and letting her get away with things such as doing her work orally instead of writing it, was just masking the problem instead of addressing it.
By the way, our daughter has just been accepted into the advanced fast-track program for highschool. They were fortunately able to look past her atrocious writing and spelling to her obvious strengths!

I hope so, Welshcakes!

That's inspiring, InTolerant Chef, thanks for sharing your daughter's story.

Sorry I missed this show! My son has a non-language based learning disability which is totally not recognized in his Italian school. He's gotten through elementary school with 7's in everything with no recognition of his strengths, interests, etc. I'm home schooling next year to really get a handle on what he can and can't do. No, it's not laziness or carelessness I kept telling the teacher...but it sadly didn't make sense to her.

I'm breathless. I've never heard anything about that before watching this movie. good luck to everyone dealing with such problems!