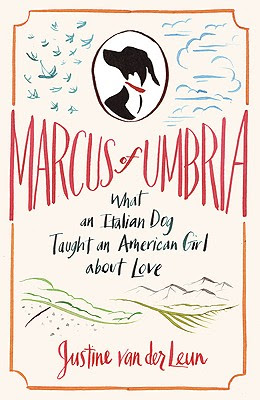 I have just finished reading Marcus of Umbria: What an Italian Dog Taught an American Girl about Love, a memoir by Justine van der Leun.

I have to admit that I was a bit dubious when I was approached by the publisher to review this newly released title. I am rather allergic to books written by Americans about their "Italian experience." Speaking very generally, they tend to find Italy "charming" or "picturesque" and often have an "oh my God, aren't these people cute!" attitude that just about drives me up the wall. And let's not even get into how they butcher the language and misinterpret local customs.

I have lived in Italy for over 18 years and am happy to be here. But I have never considered it to be cute or picturesque. That sort of reductive interpretation doesn't do justice to the complexity and reality of any nation or culture.

Let me just say...I hated Under the Tuscan Sun. On one of the most embarrassing flights I ever made from the US to Italy, the movie was being shown. The Italians on board were noticeably put out by the representation of their country and countrymen in the film...and I was embarrassed to be there as an American who perhaps saw them in that stereotyped way. That is just one of the many, many annoying books written about Italy by Americans.

But, Marcus of Umbria breaks the mold. It is the tale of a young American woman who falls head over heels in...in lust, I would say...with an Italian gardener and in the wink of an eye (like literally a two week time frame) throws over her life in New York City and moves in with him in the Italian equivalent of the rural middle of nowhere.

Thinking rationally, which van der Leun admits she was not doing at the time, it is clear that the relationship was probably doomed from the start. In my opinion, it's hard enough to create a balanced functional relationship with someone you have a lot in common with in your own country. Go figure with a person with whom you do not share a common language, cultural background, customs, daily habits, expectations from life...you name it.

Into her daily drama of trying to fit into the lives of her new boyfriend and his family, an important element to factor into any love relationship with an Italian, comes a sweet little abused dog who becomes van der Leun's raison d'etre.

The memoir paints a vivid and, I believe, highly accurate picture of life in rural Umbria with a farming family. The author describes cultural differences and expectations that were a puzzle to her, but she does so in a way that completely respects the people she is writing about and in no way holds her beliefs up as superior.

I enjoyed the book very much. I like the author's way with words, her capacity for describing and explaining her Italian experiences without falling into cliches or stating (or mis-stating) the obvious. I appreciate how she is quite straightforward in talking about her own responsibility and role in all that happened during her year in Italy. I just love that it's not all rosy, but neither is she whining or complaining about anything or anyone.

I'd say someone finally got it right!
Posted by Saretta at 3:04 PM

Email ThisBlogThis!Share to TwitterShare to FacebookShare to Pinterest
Labels: books, Marcus of Umbria

I think the author must have approached most of the bloggers in Italy! You must be at least the third reviewer that has beaten me to it. Maybe I should wait awhile now before reading and reviewing rather than flood the blogging world.

I think her publishing company probably did just blitz all the Italy bloggers, but why not? All the better to get publicity for her. As I said, I enjoyed the book...go ahead and read it! :-)

well you've got me!!! I know what you mean about the whole sterotypical Italian bit - I will definitely give it a go!!! - thankyou!!
Kathryn (www.ourprivateblog.wordpress.com)

I've been approached too, but don't live in US so was sent a PDF file of the book. I read the first chapter but I don't like reading on the computer- pity because I would love to read the book properly under an umbrella on the beach.I'll have to wait till I find an English copy in the shops!

NY city girl moves in with Umbiran gardener. . . sounds interesting. I don't profess to always understand this foreign culture, but I've learned over the years that life here can be rough, especially rural life. I watch my neighbors work, work, work, and just when I think they are done. . . work some more. They are surviving. It's not romantic at all for them.

You've peaked my interest with your review. I hope to find it in my library soon.
D

I agree Saretta, good publicity and we probably do not share that many blog readers in common either. I will try and get around to it soon.

Scintilla - I was sent a PDF copy, too. Not the most convenient for cuddling up and getting comfy while reading, I agree!

Anon & Dana - glad to have piqued your interest!

It does sound interesting.