My husband has a thing for the blues. He loves to listen to it, dance to it and will always (guaranteed) pull out his harmonica and play along. Last winter he discovered that an old high school classmate had formed a blues band and was playing gigs in our area. We bumped into them by chance at the birthday party of a friend and, to my husband's delight, they even let him play along with them on his harmonica!

Since then he has been dreaming of having these guys, the Deville Blues Band, play at a party here at our house. The main problem was the cost because live bands don't come cheap. So, we thought about it and thought about it and decided that if we asked our friends to chip in a little bit, we could pull it off.
So last night my husband's dream came true. The Deville Blues Band played in our yard and we danced the night away with about 60 friends (plus kids)! Everyone brought something to drink and although we had been quite clear that we would provide the food, being Italians they just couldn't help themselves and they almost all brought something to eat, too.
People were shy about dancing at first, but after a few drinks they loosened up and got moving. I love to dance and had a great time. 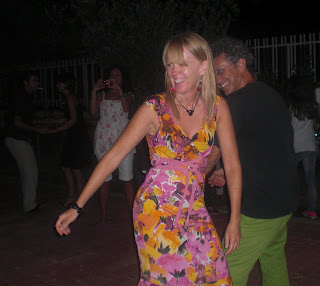 It seemed like a good time was had by all. One thing is sure: we have a spectacular quantity of leftovers. We can live for a week on the focaccia and mozzarella and I counted ten (yes 10!) bottles of wine, another huge jug of wine, lots of beer and an infinite number of bottles of water.
Enough goodies to have another party!
Posted by Saretta at 11:54 AM

I just love the way Italians know how to party :)

What a great way to end the summer! Good for you :)

I love it! I have a friend who has a band named Blues DeVille. I will have to tell him about yours. I love the blues too. I can think of nothing less wonderful than having a big party with live music at my house. We'll celebrate our 25th anniversary next summer. My husband keeps saying this is what he wants to do. We'll see. Maybe Blues DeVille will play.

It was a great night and you guys did a great job pulling it off!

My hat's off to you both!

Sounds like everyone had a great night and you look lovely.

Sounds like you need another party - to finish up those leftovers:)

Oh yes, the blues! I had no idea it was loved there too.

What a lot of fun...dancing under the Tuscan moon?

You guys look like you had a blast! Too Cool!

I love reading your blog. I have given you a bloggers award. Stop by and pick it up when you can.

Have a great day!

what a fantastic time that looks like it was!!! wow

wow! what fun! I would love to be in your yard too and listen to a live band play. I always love live bands. :)