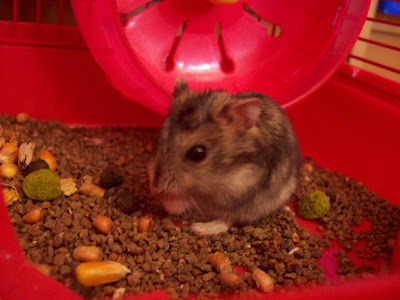 The other day my younger son, G., came home from school dead set on getting a hamster. He had never talked about wanting a hamster before. And it's not as if we don't have animals around the house. Take a look here and here for proof!

D. and F. were against the new addition, but my thought was that it would perhaps be a good idea for G. to have a responsibility all of his own. Generally, F. takes care of the dogs, I take care of the cats and D. takes care of the bunny. And it was a heck of lot better birthday gift idea than *another* Nintendo DS, which is what he had wanted. So, we now have Boris, a Russian hamster, living with us! He is very cute and innocuous...I just hope he likes red, that was the only cage they had at the pet shop! 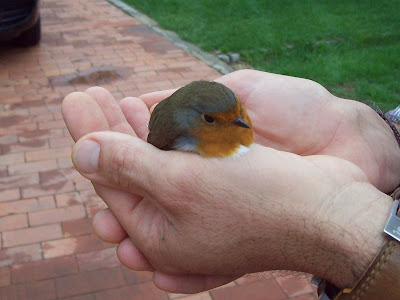 No sooner had we pulled into the driveway with Boris and his supplies in tow, did I find a little birdie lying on the ground! Now, I have to admit that I do not like birds. I mean, they're great to look at as they fly by at a distance (the greater the distance the better!), but I do not like getting up close and personal with birds. So, we sent F. out to the rescue. This little guy, who G. promptly named Tino, seemed perfectly fine, but he had one leg pulled up and seemed unable to fly. We made him as comfortable as possible in a basket lined with some soft rags and decided that if he survived the night we'd take him to the vet.

Well, this morning he was alive, though not especially well, and I took him off to the vet's in a shoebox. Her diagnosis was neurological damage rather than orthopedic, as in the leg isn't broken. Later today a friend of hers who studies veterinary medicine at the university, and knows more about birds, will pick up Tino and take care of him.

Tomorrow we're due back at the vet's with Tigro, the kitten, for vaccines and we'll let you know about Tino's progress.

D. was a bit exasperated by all this animal activity yesterday and cried out, "What is this...a zoo?!" But, really he's just as crazy about all our pets as the rest of us!

You are as diverse as we are with the pets! We've got 4 dogs, 6 cats and 9 guinea pigs(want one?). BTDT with the hamsters. They are cute and all but the G-pigs have much more personality. Unfortunately they cost a bit more to care for, especially with 9 of them.

good luck with the bird....we have never had much success in the bird rehab department - which is tragic particularly since I so love birds (enjoying them in the wild) - my parents had a parakeet after I left home and my cat died.... they loved him and my dad had the bird trained to drink beer and give kisses.

Molly, so nice to meet you! The verdict on Boris isn't in yet. He's cute, but rather unapproachable...not my favorite combination in a guy!

Kimy, we have no news about the bird yet. Went back to the vet's the next day with Tigro, but there was a different vet and she didn't know anything about Tino. I'll let you know when there's something to know!

I used to have a pet rat...very sweet!

Yep, we got a Boris too, claaed Muesli. THe kittens love him!