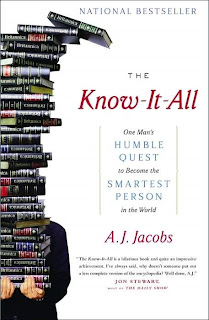 Let me just start by saying that, yes, I do realise that this is not a new book. It was published four whole years ago in 2006, and A.J. Jacobs has published other books since then, but it is new to me and I wanted to share it because I am finding it hilarious.

When I say hilarious I mean laugh-out-loud-all-by-yourself-on-the-train-and-try-to-ignore-everyone-looking-at-you-like-you-are-a-nutcase hilarious, not just your run-of-the-mill garden variety hilarious. This book is guaranteed belly laughs every time you pick it up.

The premise is that Jacobs was feeling a little bit rusty in the knowledge department and so he decided to read the entire Encylopedia Britannica from A to Z. Along the way he recounts the highlights of all the funniest, most profound or truly odd facts, while intermingling them with and relating them to his daily life, his personal neuroses, and his family relationships.

I love early on where he frames the motives behind his quest partially in his childhood belief that he was "the smartest boy in the world." In the entry for "atrophy" he writes:

I didn't just think that I was smart. I thought that I was really smart. I thought that I was, in fact, the smartest boy in the world. I'm honestly not sure how this notion popped into my head. My mom probably had something to do with it, seeing as she was only slightly less enamored of me than I was of myself. And it's true, I did pretty well on tests, sometimes notching up the highest score in the class. As my mom likes to remind me, on one geography quiz, I got so cocky, I wrote "New Joizy" instead of "New Jersey." Ha! In any case, with my handful of good fourth-grade test scores as evidence, I somehow made the logical deduction that no other ten-year-old on planet Earth was my intellectual equal. It's a leap, yes. But in my defense, I hadn't taken any high-level statistics courses. At the time, it just somehow made sense. I could just feel that I was unique in some way (again, my mom told me so).

I love it because, I too, was *sure* that I was the smartest kid alive, in my day. And my mom was always full of compliments that helped reinforce that belief in me. What a bummer to slowly figure out that there were a lot of people out there who were a whole lot smarter than me. Perhaps if I had been more intelligent I would have figured that one out sooner...

His goal of reading all recorded knowledge from A to Z also reminds me of when, at around age 10, I decided to read every book in the Berkely Public Library children's section in alphabetical order. I petered out somewhere about halfway through the Cs. Who knew there were going to be all those dreadful books for boys about camping and shooting at things with arrows?

If by chance you don't have the time to read the complete Encyclopedia yourself, you can check out Jacob's website for an excerpt from the book and this handy conversation guide:

You don't need to know it all to be a know-it-all. You just have to know one key fact about every topic under the sun. Here, a handy guide to any conversation:

Topic: Movies
Fact: Humphrey Bogart invented the phrase "Tennis anyone?" when he was a Broadway actor playing rich guys.

Topic: Sports
Fact: Touchdowns used to be worth two points and field goals were five points.

Topic: Politics
Fact: George Washington's false teeth were not made of wood; they were made of human teeth and elephant ivory.

A.J. Jacobs has since written two more books which I really hope I can get my hands on because the reviews I have read sound fun. They are The Guinea Pig Diaries and The Year of Living Biblically.

What are you reading right now?
Posted by Saretta at 2:44 PM

Email ThisBlogThis!Share to TwitterShare to FacebookShare to Pinterest
Labels: books