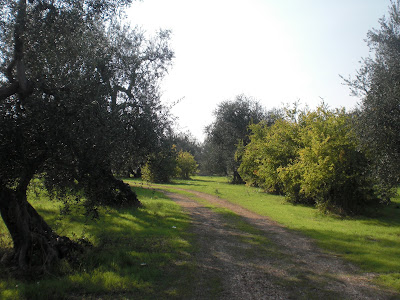 I'm sure you've heard of "Lover's Lane," a street where young couples without better accomodations go to make out. Well, I live next to an entire "Lover's Field."

My house is sort of out in the countryside, or what passes for countryside around here. We are (as the title of my blogs says) truly located amid the olive trees, amid groves of olive trees.

Our house was unoccupied for 10 years before we came to live here and it apparently became a popular destination for the making-out-in-cars set. When we first moved in we would find people doing their thing while parked right across our front gate! Needless to say, that made it kind of difficult to get in and out of the driveway...

Slowly, people seem to have figured out that the house is now occupied and so they have moved their activities over to the field next-door. This field has become such a hit that a dirt road has been cut into the ground from cars entering and exiting it with such frequency!

So who cares, right? I'm all for the philosophy of live and let live. I mean, these "visitors" are quiet. They drive in, do their business and drive out. So what's the problem?

Well, actually, there are some drawbacks to the situation. For one, I have young children and these folks do not necessarily limit their rendevous (what's the plural form of rendevous? rendevouses?!) to after-dark hours. What am I supposed to say to my boys? "No, those naked people in that car? They're just chatting sweetie, it's nothing!"

Another problem is that these folks are litterbugs. They treat the area in front of my house (yes, there are still some who have not yet transferred over to the field) and the olive grove like dumps. Almost every morning we find pizza boxes, beer cans, empty cigarette packs, used tissues, you name it. One day my mother-in-law came to visit and as she stepped out of the car, she stepped onto a used condom! Aaaaah! Luckily, she didn't notice...

And then there are the singles. Yes, that's right, the singles. Men who seem to be inspired by fresh air and nature to undertake certain types of do-it-yourself activities. Please, let's not even dwell on this one...

My husband jokes and says he's going to set up a kiosk out in the field, selling tissues, condoms, cold drinks, snacks...
Posted by Saretta at 11:29 AM 9 comments:

Cherrye Moore of My Bella Vita recently pufffed up my ego by asking to interview me (who? little old me?!) for an expat-oriented site she writes for called Affordable Calling Cards. I agreed to do it because I can remember the days when I was living in the States and dreaming of running off around the world having adventures...but didn't know how to go about it in a way that would work for me.

I'm not one of those people who can just pick up and go "travelling" for a year. I'm not quite that adventurous! And I have always liked the idea of living and working for a longer period of time in a new place, so as to get to really know the people, the customs, etc. Sightseeing has never been my thing, I want to know what real life is like when I go somewhere new. Teaching English as a Foreign Language turned out to be my path to life abroad, and my passion.

So, if hearing about my experience can help someone else make the leap...great!

To read the interview, click here.
Posted by Saretta at 8:41 AM 7 comments:

I have the pleasure today of sharing with you an article written by Ainsley Okoro, who has been examining the effects of English on the Italian language. If you enjoy this article, you can stop by Becoming Italian Word by Word to read another fascinating article on the same subject.

Given that in language class at school I was saddled with the deadly combination of window seat and dull teacher, when I started learning Italian I realised I would need all the assistance I could get.

What’s helped? The growing number of English words widely used in Italian –everything from il budget and il business to lo shopping and il weekend.

But far more annoyingly misleading are English words that have crossed into Italian – and then been given a completely different meaning, as if at random.

Take my Italian father-in-law, who wondered why I looked puzzled when he told me how, a couple of weeks previously, his car è andata in tilt. High-speed trains tilt…but cars? It means on the blink, apparently, as in not working.

Or how about the friend who explained how his son had travelled across Cuba the year previously, facendo l’autostop. That’s hitchhiking to you. Which makes some sense – but only after it’s been explained to you.

There’s more. For instance, an Italian executive might start the day putting on un tight, opening il suo box, getting into un spider and then heading to his job at un holding. (Translations: Tight is morning suit; box means garage; spider refers to a convertible car; while holding means a parent company).

At lunchtime he might fare il footing – or what in non-Italian English is known as jogging. On the other side of town, meanwhile, Mrs Executive, a TV actress, is about to shoot un nuovo spot (advertisement), in which she’s starring alongside il Mister (the manager) of soccer club Inter Milan. To prepare herself, she’s spent the morning at un wellness centre – ideal to fare il relax and have un peeling.

Later on that evening she and hubby are off to a dinner party – for which he’s changed into il suo smoking (tuxedo) while she’s in il suo montgomery. On the way they’re picking up one of her friends, who’s wearing un nuovo trench. Getting there by Lamborghini certainly beats taking il pullman. (Translation: Smoking is a tuxedo, montgomery and trench are both coats; while pullman means the bus.)

Ah, the joys of learning Italian. I mean it’s one thing being stumped by Italian words…but English ones too?

Ainsley Okoro works for the property for sale in Italy website Homes and Villas Abroad.com and specialises in Calabria property and Tuscany property
Posted by Saretta at 3:47 PM 6 comments: